The term "trace evidence" is generally thought of as any type of evidence occurring in sizes so small that it can be transferred or exchanged between two surfaces without being noticed. The first scientist to formally articulate a philosophical foundation for transfer-evidence occurrence was the Frenchman, Edmond Locard (1877-1966): The dust and debris that cover our clothing and bodies are the mute witnesses, sure and faithful, of all our movements and all our encounters.

Wherever he steps, whatever he touches, whatever he leaves, even unconsciously, will serve as silent witness against him. Not only his fingerprints or his footprints, but his hair, the fibers from his clothes, the glass he breaks, the tool marks he leaves, the paint he scratches, the blood or semen he deposits or collects - All of these and more bear mute witnessagainst him. This is evidence that does not forget. It is not confused by the excitement of the moment. It is not absent because human witnesses are. It cannot perjure itself; it cannot be wholly absent. Only its interpretation can err. Only human failure to find it, study and understand it, can diminish its value." (Crime Investigation , Kirk, Paul. L, New York : Interscience Publishers, 1953.) 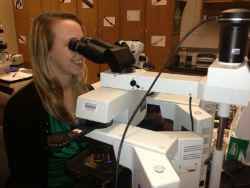 The dust and debris that cover our clothing and bodies are the mute witnesses, sure and faithful, of all our movements and all our encounters.